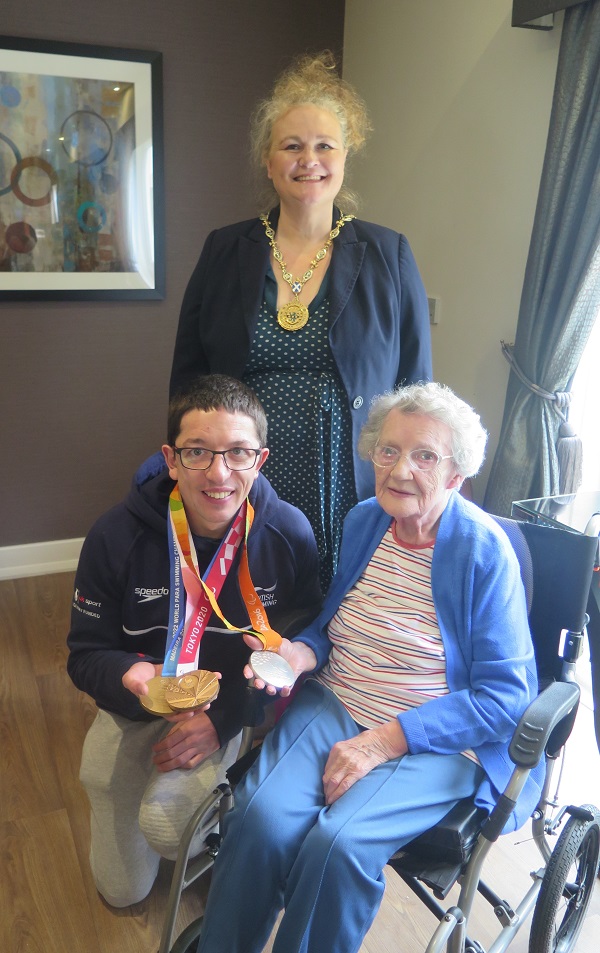 Provost Debbi McCall was honoured to join local Paralympian Scott Quin when he gave a special talk to residents about his distinguished swimming career at his gran’s care home on Monday.

Scott’s gran Mary Paton, 98, had a VIP seat at the event at Barchester’s Archview Lodge care home in Dalkeith.

While Scott passed around his medals, including the bronze he won at the Tokyo Paralympic Games in August 2020, Mrs Paton agreed she was her grandson’s biggest fan. She said she was “so proud” to be able to see him take the silver in the 100m breaststroke in the 2015 World Championships in Glasgow in person. And she also watches him on TV “all the time”.

In Tokyo, Scott won the 100 metres breaststroke bronze title despite being forced into isolation when a member of staff tested positive for Covid at the Paralympics GB’s prep camp. He was also dealing with a family emergency.

He said isolating before the race was draining. Not being able to see his colleagues or leave a small room made him empathise with care home residents during Covid.

Scott told the elderly residents: “I understood what you must all have been going through to keep safe.”

Provost McCall said: “It was a real pleasure and absolutely fascinating to hear Scott talking about starting his swimming coaching with the Loanhead Dolphins and eventually representing his country.

“He is an inspiration to all of us, young and old.”

A European champion in 2016, Scott took the silver at his Paralympics debut in Rio six years ago.

He already has his sights set on the Paris Paralympics in two years’ time.

Scott is pictured with Provost McCall and his gran, Mary Paton.