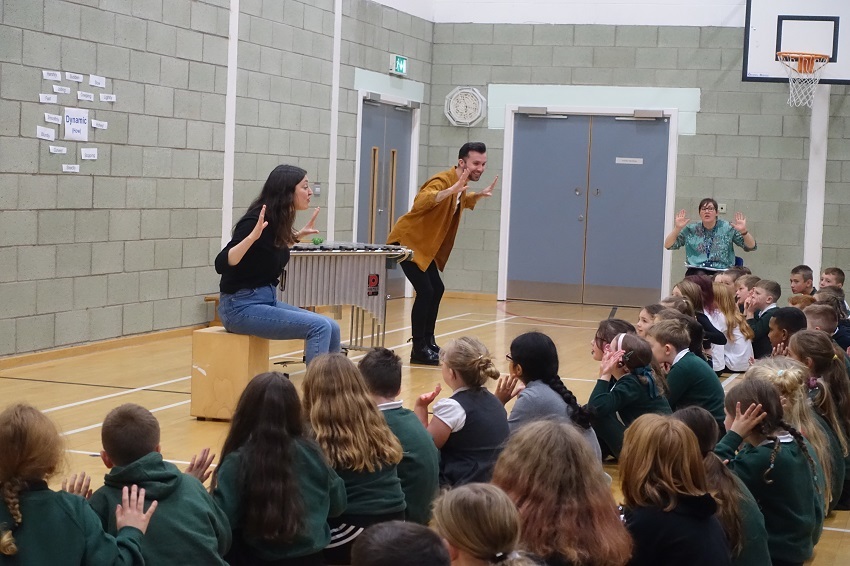 The creativity of Midlothian school pupils’ has been put at the heart of special music sessions held with tutors from The Benedetti Foundation, supported by Creative Scotland.

Set up by violinist

The foundation was established in 2019 by world-renowned Scottish violinist and dedicated music education advocate Nicola Benedetti, who has also recently been appointed as Festival Director of the Edinburgh International Festival.

The Benedetti Foundation delivers transformative experiences through mass music education and aims to ensure equal access to music participation and appreciation for all.

On November 1 and 2, nearly 500 pupils from Woodburn, Paradykes, Loanhead, Mayfield & St Luke’s Primary Schools were visited by two tutors from the Foundation, Lucy Drever and Calum Huggan, pictured, who led the pupils through sessions introducing them to a range of musical concepts, whilst also encouraging them to share their own views as to what music means to them, and how it relates to the wider world about them. They particularly enjoyed the body percussion call-and-response games.

Feedback from pupils who took part has been very positive, with Robert Dick, a manager with Midlothian Council’s Instrumental Music Service, saying: “On behalf of Midlothian Council, I would like to take this opportunity to thank the team at the Benedetti Foundation for coming to work with nearly 500 of our primary pupils and teachers this week. Thanks to the dynamism and expertise of the workshop leaders Lucy and Calum, our pupils were inspired to explore and develop their own musical creativity, which lies at the heart of our own mission to encourage our children to build their personal confidence and sense of citizenship through music. It was wonderful to see at first-hand how music can be used as a means of helping children to express how they feel about themselves and the wider world around them. We look forward to developing our partnership with the Foundation in the years ahead.”

Lucy Drever, Head of Creative Learning, The Benedetti Foundation saying: "It was such a joy to visit primary schools across East and Midlothian as part of the Foundation’s Residency Sessions. The young people were really creative, they had such powerful ideas as so why we listen to music and Calum and I had so much fun making music with them. We hope they enjoyed it as much as we did.’"

We look forward to welcoming The Benedetti Foundation back to Midlothian next year when our younger string instrumentalists will join together with their counterparts in East Lothian for a massed strings day. A workshop for primary teachers is also being planned.