Flying the flag for Pride month 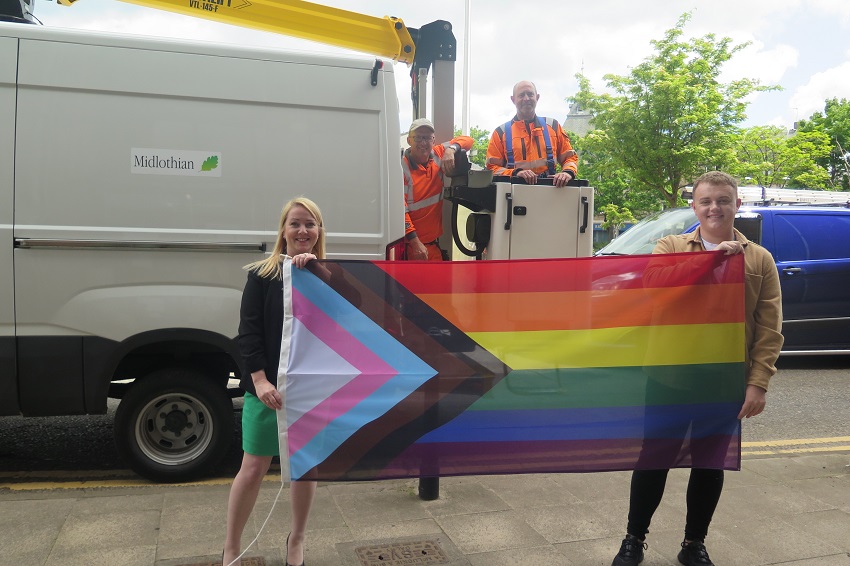 The month is dedicated to celebrating LGBTQ+ communities all around the world. The month also highlights how far LGBTQ+ rights have come and promotes acceptance whilst raising awareness of LGBTQ+ history.

The Rainbow Pride flag which is widely recognised as the symbol of lesbian, gay, bisexual and transgender (LGBT+) communities is flying from Midlothian House on Buccleuch Street.

Pictured with the flag before it was hung are Deputy Provost and Equalities Champion for Midlothian Council Cllr Connor McManus, Council Leader, Cllr Kelly Parry and behind them electricians Ian Sandilands and Jon Watt, who went up in the cherry picture to do the honours.

Cllr Connor McManus said: “Midlothian Council values inclusivity, equality and diversity. Flying the flag at Midlothian House for the month of June is a symbol of our solidarity and support for the local LGBT+ community. The month is a great opportunity for us all to celebrate and recognise the achievements and rights of lesbian, gay, bisexual and transgender people. Flying the flag also sends an important message to residents across the county that we proudly support equal rights for everyone."

During the month Midlothian libraries will have LGBT+ book displays in branches and on online.