Sean is first to complete unique placement with council 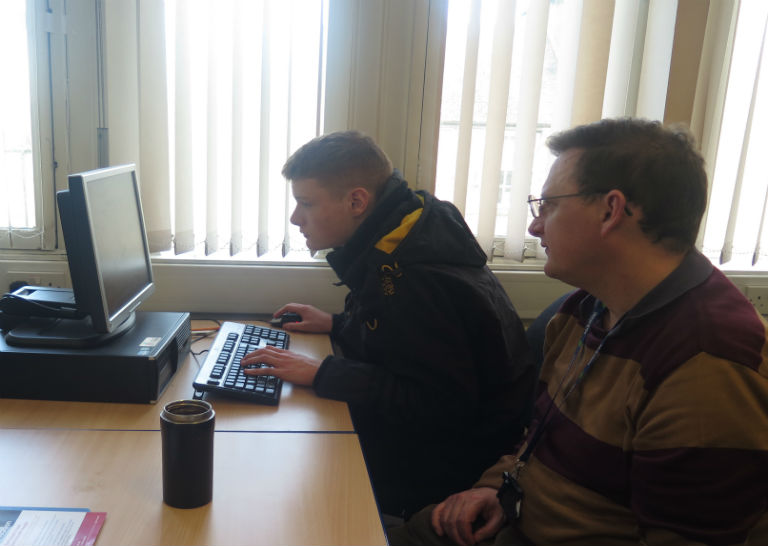 Sean Clancy, pictured on the right, has become the first person to complete a veterans placement internship with Midlothian Council.

Sean, from Edinburgh, has been working in the Lifelong Learning and Employability team as a Youth Support Worker since December last year.

Having left the army after 33 years of service, Sean joined the army reserves two years ago. However a rolling, zero hours, contract hasn’t offered much stability. The 10 week placement at the Council came at a time when there were no hours available within the reserves, and so provided an opportunity for employment.

Speaking about his experience of the placement, Sean, who now lives in East Lothian, said:

“I first heard about the placement from one of the guys at the Lothians Veteran Centre in Dalkeith. I felt the job description was similar to what I’ve done in my recent role in army which has been coaching and mentoring, helping others develop leadership skills.

“Midlothian Council have been really good with me since day one, offering support and encouraging me. It was great to know that I could transfer into something like youth work as I was a bit worried my skill set from the army wouldn’t be compatible with much.

Sean also feels others who have been in army could benefit from these types of initiatives:

“There are a lot of soldiers who are displaced when they leave - they either don’t know about joining the reserves or maybe don’t want to. Placements like these can get them back on solid ground and give them a launch pad to other things.”

Sean’s contribution to the Council has been highly beneficial and accordingly, his placement has since been extended to continue his work on the project.

The pilot programme, funded by the Armed Forces Covenant Fund, aims to act as a learning tool to demonstrate how other local authorities can and should engage with veterans, a group with much to offer but often overlooked by employers.

The Council and Bright Green Business are supported on the venture by a number of veteran organisations including Edinburgh garrison, Career Transition Partnership (CTP) Lothian Armed Forces Covenant Veterans Programme, Poppy Scotland and the Lothians Veteran Centre in Dalkeith.

Further placements will be advertised on the council's myjobscotland site.