Councillors pay tribute after death of former provost and convenor 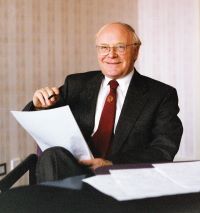 Midlothian councillors have paid tribute to former provost and councillor colleague, David R Smith, who has died at the age of 89.

Speaking on behalf of Midlothian Council, Councillor Margot Russell said: “David was a devoted public servant, a man of principle and intelligence committed to serving his community.

“David had a number of high profile roles within the council, including provost and convenor. He was also instrumental in forging strong cultural ties with other countries through chairing the Twinning Association. Indeed it was during a twinning trip to Hungary that he met his wife, Edit.

“Our thoughts are with Edit and the family at this difficult time.”

Mr Smith was elected to Dalkeith Burgh Council in 1952 at the age of 21, the youngest councillor in Scotland. In 1975 local government in Scotland was reorganised and he became an elected member of Midlothian District Council.

A further reorganisation in 1996 saw the creation of the unitary authority – Midlothian Council – at which point Mr Smith stood down after more than 40 years’ service as a councillor. Over that period he also served, at different times, on Midlothian County Council and as Provost of Dalkeith and Convenor of the District Council.

While working with the coal board and as a public servant, Mr Smith, who was also involved in the Dalkeith History Society, submitted many articles on the history of Dalkeith to the Midlothian Advertiser.

Published in May 2019, the book, ‘Dalkeith: Aspects of the history of a Scottish burgh’ comprises a selection of these.

The book originated when a small group of Mr Smith’s friends and acquaintances agreed that the volume would represent a much-deserved tribute to his dedication to serving the people of Dalkeith and Midlothian as a whole.

The book is available at Dalkeith Library.

This article was published
4 Feb 2020