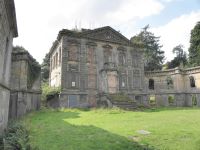 Midlothian Council is ready to step in to help secure a future for Mavisbank House – a Category A Listed ‘architectural gem’ located near Bonnyrigg.

If viable funding in place

At the full Council meeting on Tuesday, councillors approved a recommendation to use its statutory power of compulsory purchase to acquire legal title to the house. However, the council will only do so once The Landmark Trust, a charity which rescues important historical buildings, and Historic Environment Scotland have a viable funding package in place to restore the building.

Councillors heard estimated costs for a full restoration are now in the region of £20 million. The two bodies have put forward an expression of interest to the National Lottery Heritage Fund for £7 million. A response was expected some time after the General Election. If it is favourable, a formal application will be made in August of next year.

Further work would then be needed to find the rest of the money. The house would be used for holiday lets and the pavilion wings of the house would be offered to the public and local communities. Access to the grounds would be improved and the renovation would also offer offer training and educational opportunities in the skills required to bring the building up-to-date.

Sir John Clerk designed Mavisbank over the winter of 1722-23. The wings which define Mavisbank’s highly recognisable ‘footprint’ were added shortly afterwards. Built in the valley of the River North Esk between Loanhead and Bonnyrigg, it was gutted by a fire in 1973.

Mavisbank House is architecturally renowned as one of the country's earliest neo-classic houses as well as the very first Palladian villa to be built in Scotland.

Midlothian Council’s Cabinet Member for economic development, Councillor Russell Imrie said: “We’re long standing supporters of this restoration project to secure a future for this architectural gem of a building.

“That said, as has always been the case, we can only give support in-kind given the council’s financial position.”