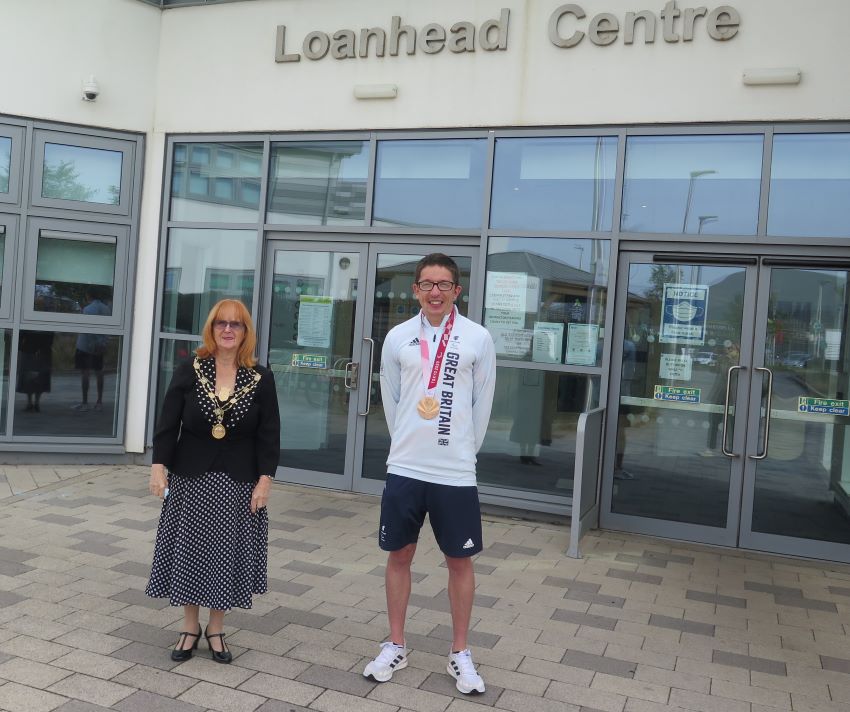 Cllr Russell congratulated Scott, who started his swimming coaching with the Loanhead Dolphins.

Speaking at the Loanhead Centre, Cllr Russell said: “Scott’s talent, hard work and enthusiasm make him a fantastic ambassador for the sport but also for Midlothian, where his parents still live.

“We’re so proud to be even a part of Scott’s success story. Well done to Scott for what is an amazing achievement.”

Scott took S14 100 metres breaststroke bronze title despite being forced into isolation when a member of staff tested positive for Covid at the Paralympics GB’s prep camp. He was also dealing with a family emergency.

“I can’t really remember too much about the race. I was so emotionally drained so it was a relief to see my time on the board,” he said.

A European champion in 2016, Scott took the silver at his Paralympics debut in Rio five years ago.

Looking to the future

Now 31, he already has his sights set on the Paris Paralympics in three years’ time.

“I love this sport so much,” says Scott who now trains with the University of Edinburgh. Scott still enjoys swimming at the Loanhead Centre, which he calls his ‘man cave’.

Before he went off for a swim at the centre, he invited the depute provost to have a look at his medal.

Cllr Russell, who was wearing her ceremonial office chain to meet the VIP, said she’d definitely been ‘outblinged’.