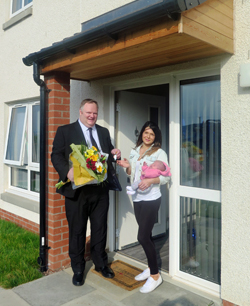 Midlothian Councillors received an update at today's (27 March 2018) council meeting on how the  innovative new build housing programme is progressing.

Phase one of Midlothian Council’s new build housing programme has now been successfully completed with the creation of 864 new houses over seven years.

Phase two is currently progressing with a total of 264 new homes already constructed at various sites in Midlothian. The target for phase two was 412 new properties but this has now been revised upwards to deliver 419. Sites have been identified for the remaining phase two housing programme and work is expected to start later this year.

Phase three is currently envisaged as being able to deliver in the region of 200 to 240 homes. A list of sites and the procurement strategy for phase three was agreed at the end of 2016. Tenders are due back next month for the development on some of these sites. Some other sites are still to be tendered and this will also happen next month.

Phase four of the new build programme covers the reuse of sites for development following council building closures. Three of these have already been identified at St Mary’s Primary School in Bonnyrigg, High St in Bonnyrigg and Stobhill Road in Gorebridge. Proposed additional sites are at Newbattle High School in Newtongrange, Buccleuch St in Dalkeith, Stobhill Depot in Gorebridge and the Hopefield Retail site.

In addition to the above, negotiations are also being held with private developers for home purchases in the area.

Council officers continue to pursue available grant monies to assist in land purchases and construction of council housing in Midlothian. Council has previously agreed the use of the Scottish Government grant bid for future housing, with additional funding for all phases of the new build programme from Housing Revenue Capital Account borrowing funded by council house rents.

Midlothian Council Leader Cllr Derek Milligan said: “Midlothian Council embarked on its new build housing programme in 2006 - one of the biggest investments in social housing by a Scottish local authority in a generation. We reached a milestone in September last year when we completed the 1000th new house. Since then we have continued to make consistent progress. We have set ourselves the target of another new 1000 homes by 2022 and in order to work towards this we have been inventive in sourcing site options.”

(pictured is the tenant of the 1000th new council house with Cllr Stephen Curran, Cabinet Member for Customer & Housing Services)