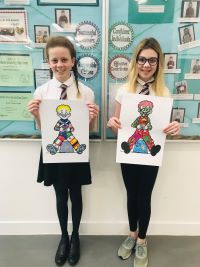 Help my Boab and Crivvens! Two talented Roslin Primary pupils, Eva Young and Ava McDonald (on the right), are to have their winning designs featured in the Scotland-wide Oor Wullie BIG Bucket Trail Challenge.

Their art will feature on the trail

Honouring the iconic Sunday Post cartoon character, the Oor Wullie BIG Bucket Trail is the first ever nationwide public art trail, and will hit the streets of Scotland’s cities in the summer.

Side of a coach

As the overall winner of the Scottish Citylink’s partnership competition P7 pupil Eva Young, 11, will see her Oor World flag design feature on the side of a Citylink coach. A miniature sculpture of her Oor Wullie will also be in Edinburgh Bus Station, as part of the trail from Monday 17 June.

Eva said "I was really excited and can't wait to see it on the Citylink bus.”

Meanwhile, Ava McDonald’s Oor Learning design scooped the top prize within her school. It too will feature on the Edinburgh art trail.

The P7 pupil said:  “I was overjoyed at winning and it was totally unexpected".

Head Teacher Jo Wilson said: "It has been an inspiring project to be part of and all the children have loved it.  We are so looking forward to seeing our two Oor Wullies on the Edinburgh Trail in the summer.”

More about the competition

A total of 70 schools in Scotland are being represented in the city trails along with other community organisations.

The competition is to get children enthusiastic about arts and crafts, as well as engaging them in important topics of conversation like Scot’s language, health and wellbeing and raising money to help support others.  Each pupil designed their own Oor Wullie on paper.

The school has also raised nearly £400 already for the Edinburgh Children’s Hospital Charity with various activities.

Since appearing in the Sunday Post over 80 years ago, Oor Wullie, which his famous catchphrases such as Help Ma Boab and Crivvens, has become a much loved part of Scottish Heritage. He’s the iconic wee Scottish laddie from the fictional town of Auchenshoogle, and some say the image of Wullie sitting on his upturned bucket, wearing his famous black dungarees is as familiar to Scots as Edinburgh Castle!