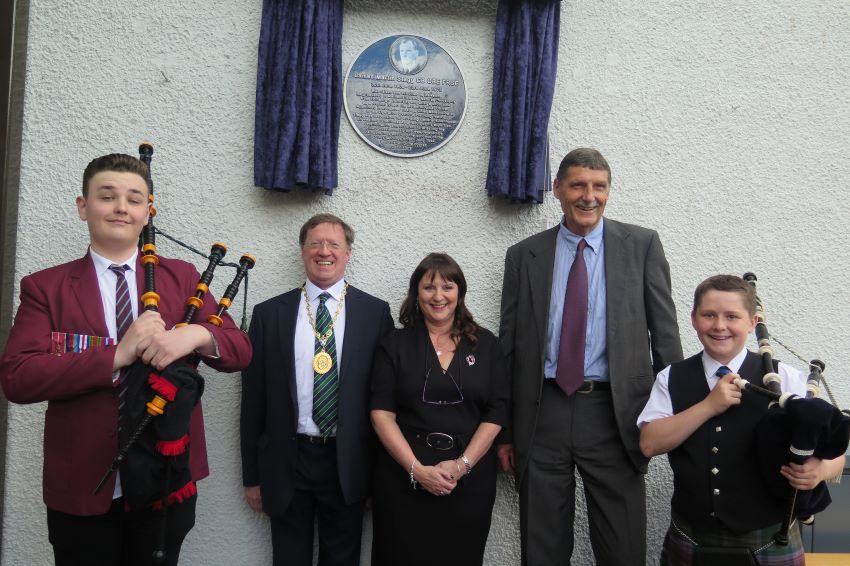 Around 150 people gathered in Dalkeith today (Thursday) for the unveiling of a plaque to honour a key player in the success of the D-Day landings.

Raised in Dalkeith, Midlothian, Group Captain James Stagg led the team responsible for advising military planners on weather conditions in preparation for the Normandy landings in June 1944. As Chief Meteorologist to General Dwight D Eisenhower, it was Stagg’s expertise that persuaded the Allied Commander to postpone the advance by 24 hours until 6 June.

Thanks to the determined efforts of local history enthusiast Sharon Mackintosh, with the support of more than thirty individuals and organisations who have helped crowdfund the project, a memorial plaque was unveiled outside Dalkeith Library today (Thursday 6 June – the 75th anniversary of D-Day).

Sharon said she was delighted that James’ son Peter was there to unveil the plaque to his father, along with other family members.

She said: “James Stagg’s professionalism, determination and expertise played a huge part in the success of the D-Day landings and his significant contribution richly deserves this lasting recognition in his home town.”

After the ceremony, attended by around 150 people, Sharon said the event “couldn’t have gone any better”. “It was fantastic and the sun shone,” she added.

Father would have been honoured

Peter Stagg said he was delighted to unveil the plaque and that his father would have been “very honoured”.

This article was published
6 Jun 2019