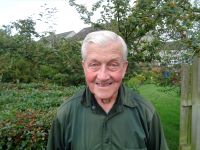 With Midlothian Outdoor Festival kicking off on Saturday 10 August, the council has paid tribute to one of its most dedicated volunteers who recently won an award for helping keep the county’s countryside open.

Arthur McKenzie, 85, scooped the title of Most Active Volunteer at the recent Volunteer Midlothian Volunteer Awards.

As well as helping run Midlothian Outdoor Festival, Arthur volunteers with the council-run Midlothian Paths Team to create new paths, build drains and cut back vegetation so that walkers, cyclists and horse riders can enjoy our green spaces.

“At a time when most of us would be looking forward to putting our feet up, Arthur is a dedicated and very, very active member of the team choosing paths that need attention and then rolling up the sleeves and doing the work.

“Thanks to Arthur and our other volunteers, who clock up an astonishing 10,000 volunteering hours annually, we have some of the most attractive and accessible countryside in Scotland showcased during Midlothian Outdoor Festival.”

Arthur, who walks up to 30 miles a week in the hills, says volunteering keeps him fit both mentally and physically.

He says: “I like the sense of achievement I get from repairing and creating new paths for others to enjoy but I also love walking the paths too.

“Being a member of the paths team and working with the Ranger Service is great company. The team goes that extra mile to make the work sociable – there’s even home-made cake.”

Arthur would encourage others to try volunteering or another activity you enjoy where you can meet new people. He says: “I’d climb the walls if I had to stay in and watch daytime telly.”

This article was published
1 Aug 2019