Partnership working is key to success 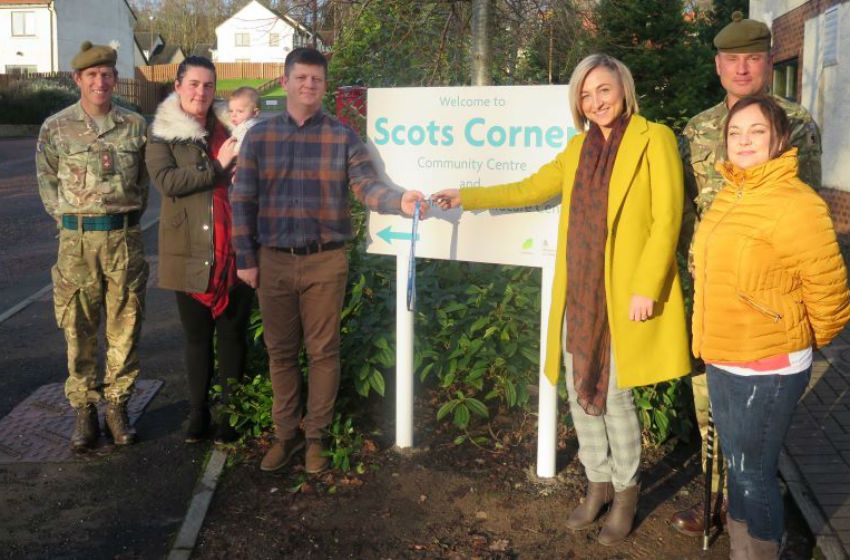 The keys to Scots Corner Early Learning and Childcare Centre (ELC), a joint project between the council and local battalion 2 SCOTS, were officially handed over in a special ceremony on Monday.

Colour Sergeant Alan Pratt, an Assistant Welfare Officer with 2 SCOTS presented the keys to Midlothian Council’s Diane Janczyk, who will be managing the ELC within the Scots Corner community centre, Penicuik.

Diane said: “This is an important milestone in this exciting joint project.

“With the official handover now complete, the next step for us is to continue to work with the MoD to refurbish the space and get the staff settled.

“We’re really looking forward to welcoming both military and non-military families from early February. The good news is there are still places available for three and four-year-olds and eligible two-year-olds so please apply now.”

Lieutenant Colonel Oli Dobson, the Commanding Officer of 2 SCOTS said: “This is a very exciting project where 2 SCOTS Welfare Team and Army Welfare Service have been working in partnership with Midlothian Council and other MOD stakeholders. 2 SCOTS has an excellent relationship with Midlothian Council through the Armed Forces Covenant and this project is an example of how we can work together for the benefit of both our own and the local community – I am very keen for as many of our 2 SCOTS families as possible to take up the opportunity to benefit from this new, on-site nursery.”

Parents and carers of three and four-year-olds and eligible two-year-olds will be offered 1140 hours of funded early learning and childcare at the centre with the opportunity to pay for hours over and above those.

A total of 32 places are available.

Parent Becky Prince says her daughters Iona, 4, and Freya, 3, are looking forward to coming to the ELC. She said: “We live just across the road so being able to drop them off in the morning will be so much easier. I’ve got four children so, as I’m sometimes without a car, getting everyone to school and nursery can take an hour.

“This way, I’ll be able to see the girls from my window just about and they’ll also know some of the staff and other children so they’ll settle in quickly.”

To apply for a place, drop in to the centre to pick up an application form at: Scots Corner Community Centre, Blackhall Terrace, Penicuik, EH26 0EW.

Pictured from left to right are: Lieutenant Colonel Oli Dobson, the Commanding Officer of 2 SCOTS, Becky Prince with 6-months-old son Ivar, Colour Sergeant Alan Pratt, an Assistant Welfare Officer with 2 SCOTS at Scots Corner, ELC manager Diane Janczyk, Regimental Sergeant Major Scott McNally and Tracy McNally, who is married to Scott but will also be working as a childcare development worker in the ELC.